Affiliate Disclosure: If you purchase a product that we have recommended, we may receive a commission. 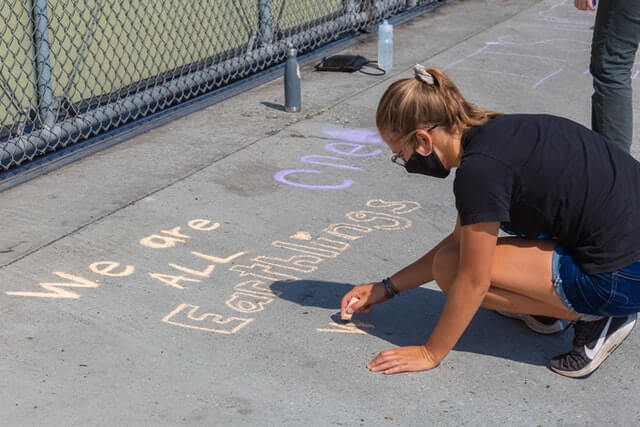 It happened again. It was Saturday afternoon and my husband and I had taken our three kids out for an afternoon at the beach. I happened to be wearing a shirt with an animal rights message: “Respect your fellow Earthlings.” Beneath the words is a drawing by cartoonist Berkeley Breathed of a young woman extending her hand to a cautious group of animals, including a chimpanzee, a dog, a bird, a bunny, and a pig.

Not exactly in your face, but it made at least one person see red, because without warning, he was in my face. His features were twisted in anger and his index finger was pointed right at my nose. My kids were startled. The 8-month-old, in a pack on her dad’s back, burst into frightened tears.

“You care more about animals than people!” the stranger shouted, spit flying from his mouth. “You should be saving babies from abortion, not worrying about pigs! You would rather help animals than unborn babies!”

Without saying a word, my husband and I guided our family past the furious man, who continued to yell epithets until we were out of his shouting range. No point in arguing with someone who’s about to throw a punch.

Such incidents are shocking, particularly when my young children witness them. But they’re hardly surprising. I’ve heard the same accusation dozens of times. It’s usually tossed up like a trump card, delivered with a smug look that says, “Now I’ve got you! Nobody can admit to caring more about cows strung upside down in the slaughterhouse than about babies!”

I’ve heard plenty of arguments against my belief that might doesn’t make right, that we have no right to cage, eat, experiment on, and wear animals on our backs simply because we hold the guns and whips and knives. But the abortion accusation is the most puzzling. Why single out animal rights activists? Did the angry man at the beach approach the fellow wearing the Miller High Life shirt and accuse him of loving beer more than babies?

There is a lot of suffering in the world and all of it needs to be addressed. Why waste time vilifying people who are already trying to alleviate some of it? My guess is that the angry man at the beach doesn’t accuse telephone operators, teachers, bankers, garbage collectors, or any other working people of loving their jobs more than babies. He probably doesn’t stand outside movie theaters accusing filmgoers of wasting their time on mindless entertainment while unborn babies die. No, the angry man’s ire is reserved for those who are trying to end cruel, outdated practices, like shoving shampoo down guinea pigs’ throats and watching tigers jump through burning hoops; for those who know we’d be healthier, and the animals better off, if we didn’t consume decaying flesh; and for those who believe fashion shouldn’t involve bloodshed.

And this is what betrays the angry man. He isn’t thinking so much about saving unborn babies as he is about preserving his turf. He is threatened by the suggestion that we should “respect our fellow Earthlings” because, if he did, he might have to make a few adjustments in his life. After he puts down his “Abortion Is Murder” sign he couldn’t stop for a Big Mac, for example. Certainly, it’s easier to make me the villain than face the fact that experimenters still starve and shock animals in”food aversion” studies. But if he labels me a hypocrite, he can dismiss the notion of “respect” for all. I happen to be pro-life. Many animal rights activists are. Many others believe abortion is acceptable, for both humans and animals. It’s not easy to categorize us. We are democrats and republicans, men and women, young, middle-aged and old, liberal and conservative; we are college professors, store clerks, writers, priests, ex-hunters, homemakers, actors, dentists, researchers, secretaries, students, veterinarians and mail carriers.

What we share is the belief that there is an alternative to every cruel act. We believe that if we can stop suffering—regardless of what species the victim is—we should stop it.

Still, I sympathize a bit with the angry man at the beach; I used to be him. I used to eat animal flesh, wear leather shoes, and munch popcorn at the circus while elephants twirled before me. Facing up to the pain I supported every time I smeared mayonnaise on a ham sandwich was momentarily uncomfortable, but finding another, better way was surprisingly easy. The most important lesson I learned is that we don’t have to choose between people and animals. There is no competition between us; sharing our compassion with animals only makes us better human beings.

Kathy Guillermo is a writer and the author of Monkey Business: The Disturbing Case That Launched the Animal Rights Movement.